My wife, Rabbanit Dr. Tamara Spitz, is simply amazing. I won’t elaborate, except to say, that one of her passions in life is the daily study of the Talmud. This week, together with hundreds of thousands of Jews around the world, she will be completing a cycle (the second one for her) of the Babylonian Talmud. By learning one page (folio really) a day, the Talmud is completed over the course of 7.5 years.
For those who are less familiar, the Talmud is the written foundation of Judaism’s Oral Law, the traditions, laws, customs, beliefs, practices and much that encompasses the heart of Judaism. This Sunday, January 5th, hundreds of thousands of Jews all across the planet, will be starting the next cycle of learning the Talmud together. This effort is known as Daf Yomi (literally, “daily page”) and it is uniting the Jewish people in joint study like few things have. As a frequent traveler, it amazes me that whether I’m in Jerusalem, London, New York, Los Angeles, Cleveland, Atlanta, or anywhere in the world, the Jewish community is always keeping pace with the worldwide schedule and studying the same page of Talmud. We are literally on the same page. Beyond that, there are dozens of online resources, translations (the Steinsaltz English translation, available for free at Sefaria bears notable mention), podcasts, videos, study guides and more. There is no excuse anymore to remain ignorant of the Talmud and its contents.
In that spirit, the prestigious WebYeshiva of Rabbi Brovender asked Tamara if she would be willing to teach a once-a-week live, online interactive review class. Tamara agreed. She will be giving a review of some of the themes that were covered the previous week, some of the Talmudic highlights and will delve into a sample Talmudic discussion from the previous week. This will be an excellent, low impact introduction for people who have not had any exposure to the Talmud before and will likewise be a fantastic review for those who do study a page of the Talmud on a daily basis, but who like me, quickly forget whatever it is we learned.
The class is free. If you miss the live interactive webcast, you can always catch the recording later. So without further ado, please follow the below link and register. You won’t regret it.
Thanks and welcome to the world of Daf Yomi.
Ben-Tzion
https://www.webyeshiva.org/course/daf-yomi-one-week-at-a-time/ 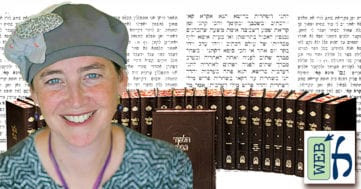 Buy my book on Amazon!

For all the China Travelogue readers!